A good piece of art should explain itself.  I'm not a good cartoonist so I feel obligated to explain the panel that I made for a comic book that I just never get around to finishing. It was going to be the "centerfold", so that is fitting that it turned out to be so obscene.   The chessboard is self-explanatory.  We are caught in a game.  A lethal game where players are captured and/or killed and the object is to obliterate the other side while making it cry Uncle!  The chessboard is self explanatory.  We are engaged in a battle with an expert opponent that CREATED THE GAME therefore the opponent has made up - and makes up - the rules as it goes along; breaking or bending them because Force of Armas is the only thing that matters.  Ask Mao Tse Tung.  The chessboard is self-explanatory because this formidable foe thinks at least three moves in advance.  So, while we found ourselves born into a military assault already in progress They have had millennia of playing to insure that if we go forward or back, left or right, or diagonally in any direction, then in the genteel parlance of chess: we're fucked.

So, who are the players?
The KING is the Vaccinator.  The inventor of the vaccine holocaust that destroys everything in its wake.  A mosquito, a stinging insect that transmit disease and death to all that are infected by his bite.  The Vaccinator is not necessarily a person although cloaked in the figurehead of a 'doctor' or 'medicine'.  Unless you consider corporations: persons.  It is a collective Hive entity that sees to the continuation of viruses, bacteria, fungus, and parasites by growing them and shooting them into mindless victims who were gutted by the viruses, bacteria, fungus and parasites in the first place.  Perpetual motion.

Don't EVER think that any of those involved are in it for the money.  That is just a point accrual system in The Game.  THEY can print money at will.  It is inconsequential.  Their true goal, the same goal as the Demons in Dante's Inferno is the creative application of torture and suffering on mankind.  They thrive on it.  Disaster capitalism.  Whether the victims die fast or slow does not matter the cash can be collected with either outcome and there are millions of Damned Souls to take their place once they are gone.

Call it what you will: greed, sadism, or just being a useful idiot.  But the I Was Just Following Orders, or I Didn't Know, or They Didn't Tell Me doesn't hold at the level of education to make, legislate, prescribe and administer biological weapons.  There is no way that they can't know they are writing a prescription for death.  Hell, I'm a Dumb Farm Boy from the Grain Ghetto in ILL Annoyed and I figured it out within months of discovering the word: Serum Sickness.


Who is the Queen?  Why the Nurse, of course!  When have you ever seen a doctor do --- well...anything, let alone administer the orders that he puts out?  Nurses know better.  They can't not know.  The opening phase in the stages of grief is called Denial.  They refuse to see, they refuse to acknowledge, they refuse to tell their victims that they are dealing out a death sentence, whether it is fast or slow.  Vaccines are biological weapons and a weapon has only one purpose: to Harm, Maim, and/or Kill.

The Bishop is the clergy.  Even in the time of variolation, the church was prevailed upon to be an instrument in the dealing out of death.  And even when they KNEW they were the vector of that death they still blamed the sinful masses for the Judgment of God for the biological holocaust that they participated in.  The Society for the Propagation of the Gospel missionaries were issued a shovel to bury those that they would kill upon exposure to European diseases.  Defecting to the side of the Oppressors as you can see in the cartoon is the male force from the OPPOSING SIDE.  That man should have stood for himself and his own, but through the agency of religion he becomes a collaborator with the Enemy.  How many missionaries continue to pollute normal natural genomes of remote corners of this planet in the name of 'medicine' or 'mercy' by inflicting vaccines on them?

The policeman is the Knight who slays anything in its path blindly for its liege.  The mind of a Law Enforcement Officer is that of a brute, a bully, a psychopath, a murderer.  Left to themselves all humans have the ability and right to defend themselves and correct wrongs.  There is no NEED for police or military.  The 'need' was created in order to steal your tribute (tax money) to fund a gang of criminals who work for the Other Side.  [protocol page]  So, of course, when the orders from their masters come down to forcibly vaccinate any and all in their path they will do it with lethal force because they have no mind of their own.

The Rook is the businessman, the salesman, the drug company rep.  You know you are getting Rooked when he shows up.

The Pawns, of course, on Their side are those innocent 'sterile' needles with the clear fluid in them.  Something so modern and 'clean' couldn't possibly be a Death Timer set off the second it pierces your body.  Like pawns they are disposable.  Like Pawns they are faceless.  Just because it says: Influenza on the label, if you didn't make it you have no idea what is in it.  So, too, the Hu-Man face of the pawns can be seen in vaccine proponents.  Jenner learned from the Jesuits that the way into the family was through the mother so he focused on teaching women the METHOD of vaccination.  Women like to 'help'.  No one every questioned the WHY of vaccination just whether or not they were DOING it right.  So, the Hu-Man pawns are like empty needles filled with pernicious poison ready to stab anything hapless enough to cross their path.  Because these Hu-Man pawns are filled with the microbes they are then driven as in any other disease state to spread and replicate.  This is why pro-vaccine creatures are lethally aggressive in their pursuit to serve the organisms that control them.

Contrast this as we cross the line to our side of the board where Infants are the Pawns.  They are the ones that got the unknown pus from Jenner's time that morphed into the unknown clear fluid of this era.  All these rare genetic disorders.  All these epidemic diseases of unknown origin yet babies are still brought by their parents as sacrifices to the priests.  I have demonstrated undeniably in all of my work that nearly ALL of the diseases in the modern world can be traced directly back to vaccines.  Adults still roll up their sleeves like the mind-gutted slaves that they are.

Where there should be men in the position of defending their Queen, they are curled up in fetal position, paralyzed by fear, not doing anything.  It did not escape the attention of some viewers of this panel that the Knights, the trained ones, who were supposed to be able and willing to defend to the death all those who are oppressed by The Enemy are riding away as fast as they can, carrying their patriotic colors with them.

The lie that is government is appropriately labeled a Rook on the side of the Opposition.  It lies in ruins because it never had a foundation to begin with.  It is not there for you.  It is not there to help.  It cannot and will not protect you.  Title 50 of the US Code alone tells you that you are a test subject in a military experiment.  Govern Mente means To Steer the Mind.  Mind Control.  There never was a government in the sense that you were led to believe but then leading is exactly what that system was set up to do in the first place.

The Queen, the mother, the female power, is left alone to face the onslaught.  Abandoned by husband, lover, friend.  Abandoned by militia, Knight in Shining Armor, government, and church.  All gone or defected to the other side.  No wonder she feels weak, alone and powerless.  No wonder she is the only one that can make a difference.

SHE'S THE ONLY ONE LEFT! 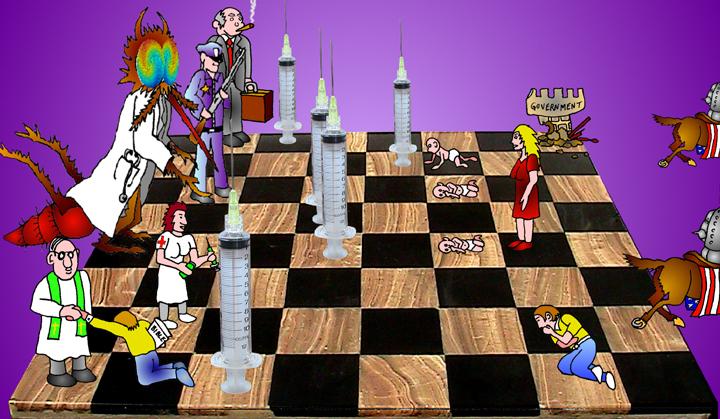