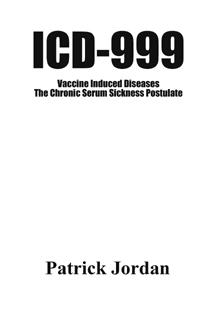 ICD-999 started out as a chapter. It turned into a book. The title is from reading the 2002 Burton Report on Autism. I read everything from beginning to end because I figure that if someone took the time to follow the Greek method of beginning, middle and end to story construction then it is only sensible to consume the work in that manner. I despise people who read the end of the book first or just hop around grazing for highlights. It was because I was suffering through the document quite a distance in with text so boring I was near tears and ready to give up that I happened upon a reference of industry hacks debating on what to do with the ICD-999 codes.

The W.H.O. purveys the International Classification of Diseases. Before they were updated they were called the ICD-9 codes. The ICD-999 series deals with VACCINE INDUCED DISEASES!

They stuffed them at the end of the book like you would stuff a festering dead body in a closet hoping that no one would notice. But it got out --- didn't it? It was in the 2002 Burton Report on Autism. Did you read it? Didn't you see it? I did. It screamed at me like the greatest revelation possible that they not only KNEW what they were doing but they were covering it up. That is conspiracy. That is fraud. The outcome was/is murder. When you put it that way then it is no longer just "that booster shot". It is no longer "catching up on school mandated shots". It is a fast or slow kill and the ruination of health and life.

Here is where you start.
You start with the reality that this entire planet is under military control. That military sees you as their Enemy and test subjects in what has been revealed to be a Medical Manhattan Project extension of Operation Paperclip.  I can't soundbite 16 continuous years of non-stop research and 8 years of writing. That is what the books are for.  I will, however, take you on a guided tour through Hell.

​Dante said to Virgil: "Master the sense of it is hard."
Virgil replied: "Here all misgiving must thy mind reject.  Here cowardice must die and be no more."