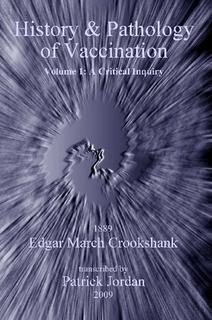 If you forced me to answer the question:
If I could only buy one book: would you suggest ICD-999 or Crookshank, vol. 1 ?

My answer would have to be: Yes.

For two years I lived with Dead Edgar, transcribing his books from original copies into what I have made available to scholars with only Crookshank's text or for the really serious researcher with Crookshank's polite englishman prose interspersed with the foul emanations of Patrick Jordan screaming that we are under military assault from the greatest enemy mankind will ever know.

I've never known a soldier who has been engaged in hostilities that did not cuss and curse, and that included the christians.

I got to know Edgar so well, that I figured we were twin sons of mothers separated by 100 years.  My work is the equivalent of Crooky's with the distinction that 127 after he pronounced Jenner a fraud and said that vaccination should have faded from history, that I am telling the same story with cussing and cursing.  I mean: Edgar did the right and perfect and scholarly thing and what did it get him?  Loss of work and his books got disappeared or hidden in libraries where no one had access to them.

HISTORY & PATHOLOGY OF VACCINATION, VOLUME ONE, IS THE MOST IMPORTANT BOOK YOU WILL EVER READ!

There.  You made me say it.

Crooky 1 & 2 transcriptions followed chronologically after ICD-999 as completed works, but they were as much a part of the making of ICD-999 as any single bit of data in my book.  My book, like all of my work, is a synthesis.  Meta-analysis.  I have had to re-read ICD-999 and use it for reference myself and I find that it is one of the most significant works out there equal only to that of Edgar March Crookshank.  Hell, maybe every 100 years the spirit of genius and rightness shows up to have a stab at fixing the fuckedness of the world, but it is high time to stop the polite prose, walk up to the Devil, kick it in the balls and stab out its eyes.

ICD-999 is also the most important book you will ever read, but if you forced me, if you really made me have to choose, I would go with Crooky because there is no denying a man of letters, using primary source material, doing the right thing and sacrificing his being for us.

There is a Native American saying: something lives only as long as the last person who remembers it.
May Dead Edgar live forever!

History & Pathology of Vaccination, Volume 1 is the sum total of all of the evidence that you need to know straight from Jenner and his evil minions just what a total fraud his superstition was.  It is a stand-alone epic.  With my commentary you will be privy to the secrets of Life & Death that have been occulted to you by skillful, premeditated 'science education'.

History & Pathology of Vaccination, Volume 2 follows up with tons of more information that is, in my opinion, not as powerful as the first book, but has small concentrated doses of mindblowing revelations found nowhere else in historical or contemporary literature.  If you read the version with my commentary you will find that it is more like the life and times of Don Quixote and Sancho Panza than Fast Eddy Jenner and his insane followers.
Because someone of Crookshank's stature wrote a two volume set, I feel we are obligated to read and study both, but, in a pinch, or a squeeze, or a 16-ton weight dropping from the sky, if I was made to choose then I would say that Volume 1 with my commentary was the one to get...until...you could give up smoking a pack a day so that you could afford to get his other book and mine as well... 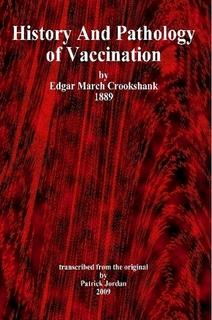 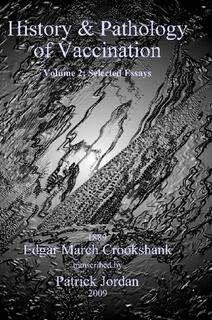 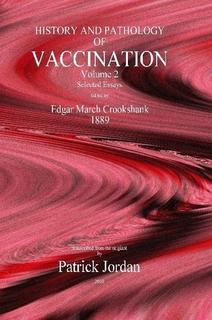