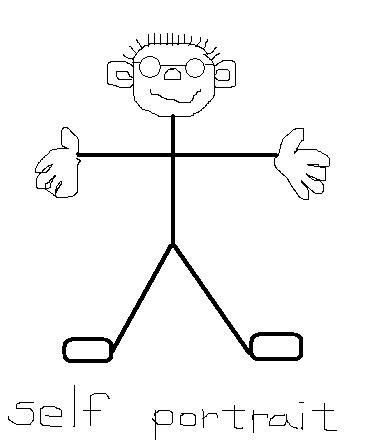 It's about the material.

What I present is either valid and useful or my entire reason for being is useless.

There will be no Cult of Personality here.  There will be no pictures of me with the face of Fabio and the body of PeeWee Herman or the other way round.  It doesn't matter.  If the data on this website has no relevance to the prevention of the extinction of Mankind then what I look like won't matter.  All of Mankind has been conditioned to get their information including insights into preserving their immortal souls from the Yahoodim so showing a non-Family face to the world might even work against the information taking hold.

I do offer this self-portrait as an uncanny likeness of myself.  The hairdoo is particularly accurate.  As are the glasses.  As are the trim figure.  The feet are a bit of artistic license.

So who in Hell am I?

A Farm Boy from ILL Annoyed (my Californication friends call Illinois that) who just happened to fall across a phrase "Serum Sickness" when investigating why his mother had kidney disease causing him to fall headlong into the black hole in the center of the universe.  From that singular entrypoint in the year 2000 the entire course of my life changed.  From 2008 on I have done nothing day and night except to expose the Fraud of vaccination and work towards a solution to eradicate the CAUSE of this infliction of Disease and Death on Mankind.

Because the connection of vaccines to the Dark Arts was so apparent, I started studying religion to find that it was the source of all politics so we have religion, politics and what passes for medicine as an inseparable continuum.  Although I have been at this overall quest for over 30 years it has been within the past 19 that I have been able to uncover the framework of what I call the ongoing Operation Paperclip of the Medical Manhattan Project.  Not bad for a Dumb Farm Boy with the Brain the Size of a Planet.  Patrick Jordan, DFB, BsP.  Hey!  If Hollywood can invent the Oscars and give it to themselves then I can give myself honorary degrees!  So, whereas the system that has been quietly constructing a world in its image has had over 6000 years to put their plans into action, in one-two-hundredth of that time I have been able to expertly vivesect it for your inspection.

A parasite delivered by a ubiquitous system has inserted and asserted itself into the Hu-man entity to take it over in order to do its bidding.  If you think that a virus cannot think or create anything then visit a cancer center some time.  Viruses CREATED the sickness, the buildings, and the system that serves it.  Candida makes you eat doughnuts.  Rabies makes you bite.  The Wax Moth that can enter honeybee hives because it puts off a pheromone that makes the bees think that it is one of them.  Scent-masking.  The moth will lay its offspring in the care of the Hive who ignorantly allow the larvae to eat their own cocoons, then the bees' wax, the honey and the bee larvae unless the moth worms are destroyed.

DO YOU REALLY THINK, NOW, AFTER HAVING LIFE EXPLAINED TO YOU THAT YOU HAVE ANY LEVEL OF CONTROL OVER YOURSELF OR THE WORLD AROUND YOU?

What the ancients called the Archons (governors/controllers) as occulted in religion, I call an viral infection that has taken over their Opposable Thumb Puppet hosts in order to restructure the planet to serve it and foster its replication.  Ultimately that parasite will, as many parasites do, change hosts and forms.  This transformation is already underway in the melding of biological and cybernetic systems.  The transhuman/cyborg agenda is nothing short of the viri inducing their hosts to create an indestructible battle frame so that when the Hu-Man race has served its purpose and is no longer necessary, the parasite can jump into another vehicle thus achieving the immortality that it seeks because it fears extinction.

Who is Pat Jordan?

I am the lens through which you can see the world so that you can identify the enemy, route it out and exterminate it before it infects any other system.

Pleased to meet you by the way...