Total sales of church robes in the past year:  $ ZERO!

I can only assume that either:
- everyone is broke like me.
- my religion is a failure like all of the rest.
- folks are just allergic to terry cloth.

Could be all of the above, but since no one has joined (Ms. MaGoo asserted herself as High Priestess of the religion, but that doesn't qualify as 'joining' it is more like an unhostile takeover) I can't survey what went wrong.

My secret suspicion is the language.  In MY religion everyone and everything is expected to WORK.  It is well known that Work is a Four-Letter-Word that is shunned by the Hive (another 4-letter word) because it likes to pay its hypnoslaves for just keeping seats warm while they do the secret work of an agenda that is so vast and cruelly evil that if the minions knew what was going on then....

...well, they would still be doing it.  That is why I don't call those in agriculture farmers.  They are Pharm Whores.  What is called 'work' is actually busy distraction to keep you from looking under the skirt of the Fat Lady to find that you are serving the Beast and promoting its agenda for a few scraps while you and it collaborate on the destruction of the biosphere.

...and they take taxes out of the scraps while you are doing it...

So, I think that membership is down because, well, people are down.  Not in the depressive sense (although that is a possibility) it is that they are 'down' with Evil.  They like it.  It feeds them.  It excites them.  It is predictable.  With Evil you know you are going to die a horrible death and that the world that supports you will be used like a cheap whore before it too is killed.  There is comfort in knowing the future.

With me and Mechanism, there is no prediction, no HOPE (THE WORST FOUR-LETTER WORD ON THE PLANET!), no guarantee  of the future.  The future will be what you make it.

But then that is the conundrum we are in now (I said: conNUNdRum) isn't it?  The future is what we make it and it is a total fucking insane lethal disaster.  Like I said: people are down with Evil.

So, what can YOU do to make the world a better place?

You can start with getting a Mechanic's robe.  Start off by wearing it just inside the house.  You will begin to see how comfortable it can be.  You need not go outside to proselytize to the world that does not want to hear (ANOTHER four-letter word!).  Get started by wiping your greasy hands on the robe from the fake butter on the popcorn you are eating as you snuggle up to a good video on depopulation or 911 fraud or anything that might lead you from the disinformation of the mainstream media to the controlled opposition of the alternative media (hey! we're in transition here).  Soon you will have the urge to go outside, till the soil, plant seeds and be working on infernal combustion engines.  We can't all be Profits of the Work, but every individual can make a difference in their own backyard (unless the neighborhood watch calls the cops on you for growing illicit vegetables and feeding the homeless - in which case the monkey wrenches double as attitude correction devices).

If all else fails you can join me in a worldwide pursuit of a solution as we all:

St. Patty The Vine:
Chief Revelator & Grease Monkey
Holder of The Wrench;
Chef of What's Cookin' in Hell;
De Fender of De-Faith;
Pope of Pistons:
Bishop of Bumpers;
Cardinal of Carnage;
Priest of Petrol: the Holy Waters
by witch all things run down
to a burning halt.

The Church of the Mechanic was borne out of frustration (not a typo, I am a wordsmith).

Arthur Christian of Love for Life made an observation that ALL of the religions and philosophies of the world have had thousands of years to make the world better yet have accomplished NOTHING!

So, I invented the First Church of the Mechanic.  The full Creed goes like this:

The only requirements are to purchase a terrycloth bathrobe with the church's logo, cannon, and monogram of the owner embroidered on it (used to be available at Cafepress...?) because it is a WORKING religion therefore you will need something to wipe the grease off of your hands while working on your tractors because people should be growing their own food not eating what the Hive feeds them.  If you are MAKING A LIVING by ACTUALLY LIVING then you will be too busy to even give a damn what your neighbor is doing let alone what some gits pretending to be president might be up to.

Church Of The Mechanic 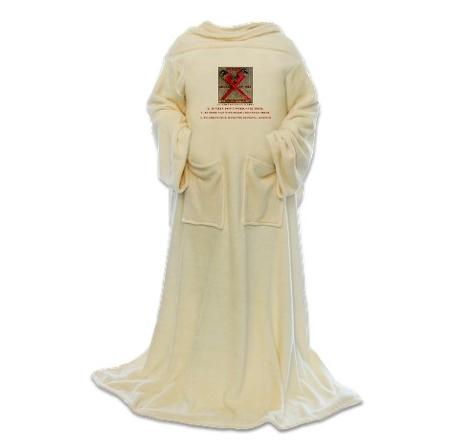 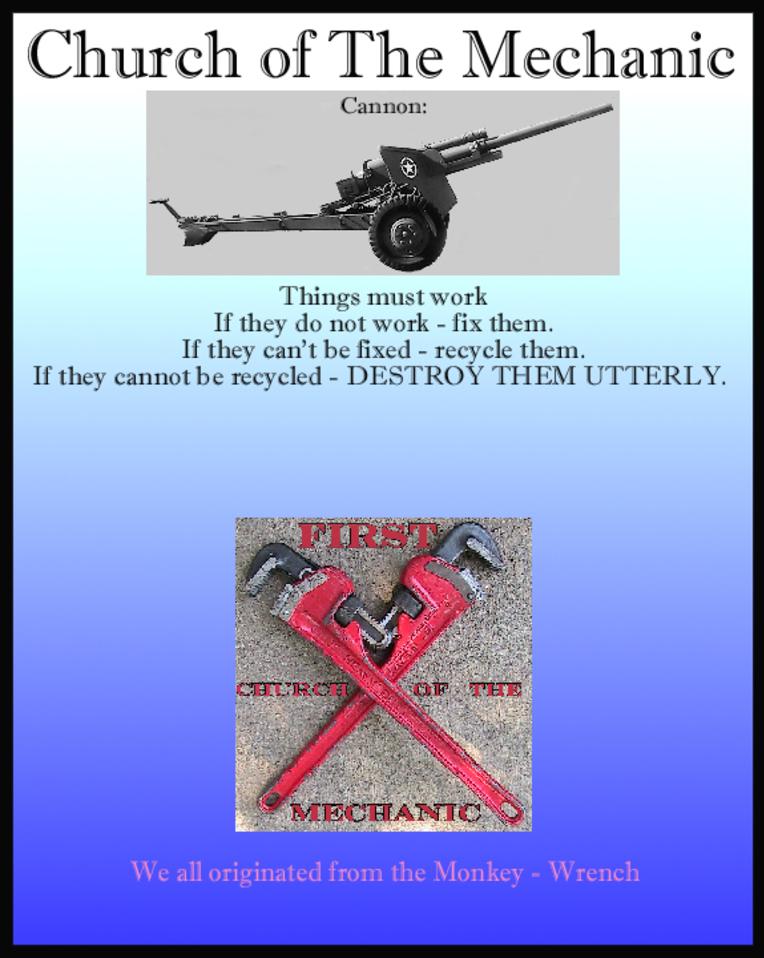